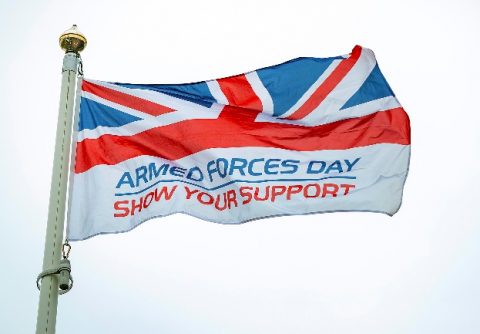 A virtual flag-raising ceremony to mark the start of Armed Forces Week will be led by the borough’s Mayor Cllr Diane Taylor on Monday 22 June.

Following COVID-19 restrictions, there won’t be a gathering of Armed Forces personnel this year but the virtual celebration will be broadcast on the Mayor’s social media channels at 10am.

This will show CSgt Kieran Purnell from 3PL (Basingstoke) Army Cadet Force raising the Armed Forces flag outside Basingstoke’s Civic Offices. The Mayor is joined in the video by Sqn Ldr Robert Hylands from RAF Odiham and bugler Stuart Hasking from The Salvation Army, Basingstoke.

Armed Forces Week is a chance to show support for those in the armed forces community, from serving troops to service families, veterans and cadets, and provides a much-valued morale boost.

Each day of Armed Forces Week will highlight different parts of the British military, including service personnel, their equipment and their roles. Reserves Day is being celebrated on Wednesday 24 June 2020.

Cllr Taylor said: “Armed Forces Day is an acknowledgement of the hard work and dedication of men and women in the services and to show our support to those who are currently serving.

“Whilst we are unable hold a public flag-raising ceremony this year, I invite all Basingstoke and Deane residents to give their thanks to our Armed Forces for their dedication, their bravery and the incredible sacrifices they have made for all of us.”

Join the Mayor on Twitter @BasingMayor and Facebook @BasingstokeMayor at 10am on Monday 22 June to salute the Armed Forces. Get involved here.