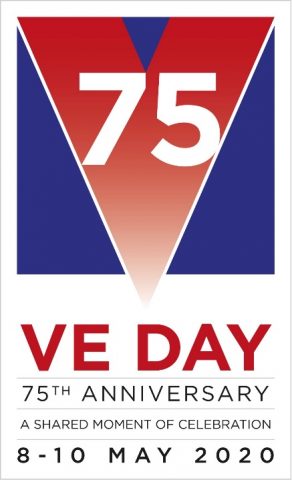 We are approaching our special Bank Holiday, 8th May – a day to start the celebrations of a great victory 75 years ago when the war in Europe was finally and officially over.

The spirit of hope that remained alive throughout those years is truly remarkable. It was fuelled by the political, spiritual and military leaders of the day and, of course, by King George VI, a veteran of the First World War who, with Queen Elizabeth (later the Queen Mother), became a figurehead, visiting factories, hospitals and bombed areas and visiting troops abroad.  The speech that he gave, with his customary difficulty, 75 years ago on Victory in Europe Day still inspires us today:

“… let us think what it was that has upheld us through nearly six years of suffering and peril.  The knowledge that everything was at stake: our freedom, our independence, our very existence as a people; but the knowledge also that in defending ourselves we were defending the liberties of the whole world; that our cause was the cause not of this nation only, not of this Empire and Commonwealth only, but of every land where freedom is cherished and law and liberty go hand in hand…… We did not fail.  We kept faith with ourselves and with one another, we kept faith and unity with our great allies. That faith, that unity have carried us to victory through dangers which at times seemed overwhelming.”

One of the unique phrases that he uses is “proud sorrow”.  For me, that phrase resounds again as I think of the frontline NHS and care staff who have lost their lives during our current, very different, conflict.  I am so proud of them, but so intensely sad that they made the ultimate sacrifice as they tried to save others. Their profession is a truly noble calling, and that fact has never been more evident than in our current crisis.

We can’t gather together as planned in celebration of VE Day’s special anniversary today, but let’s find our own ways to mark the occasion.  We can join the nation in a two-minute silence at 11am to remember a generation’s immense sacrifice, followed by a celebratory toast at 3pm to honour a great victory that brought us the amazing privileges and freedoms that we enjoy today.

We shall be marking the VE Day 75 through a number of videos on the Mayoral and borough council social media channels, including Facebook @BasingstokeMayor and Twitter @BasingMayor throughout the day.

Please stay safe and reduce the spread of Covid-19 by staying at home and finding your own special way of marking this anniversary.